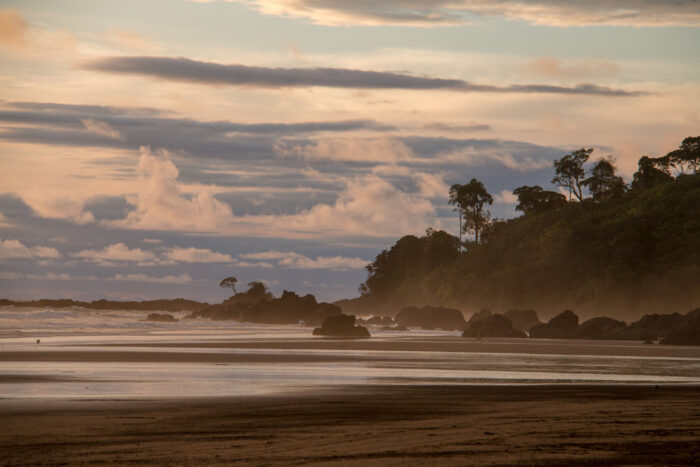 Kagumu founder, Simon Willis, explores one of the world’s most biodiverse regions, searching for nesting sea turtles on what he thinks is a deserted Pacific beach.

Lying on our stomachs, chins resting on the sorbet sand, we watch as a sea turtle lays its eggs in front.

It’s almost midnight and this section of Colombia’s Pacific beach is blanketed in darkness except for our flashlights illuminating white ping-pong balls dropping from the turtle’s rear.

We count 41 when my guide Martin switches off his flashlight and covers mine with his other hand. “Shhh,” he whispers. We twist our heads to the left. Two faint lights flicker in the distance. Potential poachers. “Quick!” Martin says, grabbing a plastic bag, “we need to collect the eggs now!”

This olive ridley sea turtle is one of hundreds that from September to January clambers onto these Pacific beaches to lay eggs. But due to scavenger dogs and egg poachers, their population is in decline. So I’ve come to the small fishing town of El Valle to lend a helping hand and discover a rarely-visited coastline before it’s invaded by tourists.

There have been ongoing plans to extend the local airstrip in Bahia Solano, meaning Colombia’s Pacific Coast could soon be engulfed by a tidal wave of new tourists. For now though, the airport is so delightfully dilapidated that it’s unable to service larger aircrafts than those flying 45-minutes from Medellin. And the other route, a 12-hour boat ride from the Buenaventura port, is too unsafe to consider.

It’s mid-September and I’m staying a mango’s throw from the ocean at El Almejal eco-lodge. At its gated entrance, four giant palm trees cradling bunches of coconuts, stand like guards outside a palace. Two chirping yellow birds swoop across my brow as I hop sand, into the shade of my cabin. Inside, a fluorescent green lizard with the head of a punk rocker scampers up the wall and into the open bathroom.

A special species under threat

​Next to my cabin – one of 12 on the site – a rocky path leads up to a nature reserve and an observation porch from where whale huffs can be spotted in the distance. From June to October boat trips to see migrating humpbacks are available as well as dolphin tours, waterfall visits, fishing, bird watching, kayaking and river boat rides.

Part of El Almejal’s commitment to eco-tourism is its turtle conservation scheme. The Olive Ridley Project was started in 1994 and invites volunteers to collect eggs from the beach, lay them in a protected pen, and release the little scampers into the ocean.

As I lunch at El Almejal, prying the last fish bone away from its white filet and considering how I can find turtles alone, I receive an offer from the waiter Martin. He says he knows a beach with nesting turtles and is willing to take me.

We meet outside the restaurant at 11pm. Martin wears sandals, a baggy check shirt and loose fitting jeans. He slides his glasses up his scrawny nose as we shake hands. His bony fingers feel like guitar strings.

“First we collect my motorcycle from town,” he says in a squeaky voice. “This way we cover more ground and have a better chance of finding turtles.”

The mud track from the beach leads to the town of El Valle. We pass breezeblock single-story houses with corrugated metal roofs, hundreds of wires attached from one to the other, lampposts illuminating small areas of earth below, then darkness.

Four voluptuous women sit at the roadside, their bare feet swaying to salsa music on the radio. Martin waves to them and three men stood behind whose stained white vests are proudly rolled up over their pot bellies.

As I jog behind, splashing mud on my bare legs, Martin sidesteps puddles without looking and tells me why the sea turtle population is in decline.

​“Humans steal the eggs,” he says, waving to a man in a house window.

“Dogs and birds eat them and so do humans, for breakfast.”

I stumble behind Martin to avoid a whizzing motorbike. “Breakfast?”

A two man journey into the night

​Martin’s house door is open when we arrive. Inside, his aunt and a shirtless boy watch Colombia’s version of ‘wipeout’ on a portable television.

Martin backs his motorbike out of the front room and I climb on. We ride through the town, rattle over a wooden bridge, where three teenage girls are fishing, and around the back of his old elementary school with a mural of Holy Mary on its side.

We weave around trees, brush past bushes and skid onto a vast expanse of beach. It’s silent except for the shuh… shuh…shuh of waves, and bugs pinging into the motorcycle headlamp.

Martin revs us along the sand while I scan the beach from behind with my flashlight. I lift my legs like a starfish as we splash through the ocean’s edge. Then, I spot something. “Allí!” (There!)

Martin slams on the breaks and swerves around. His flashlight illuminates a turtle crawling up the beach.

A tsunami of pride washes over me.

We park the motorcycle and crawl behind the turtle to its nesting spot; so close that we can see discharge oozing from its wrinkly underbelly.

After five minutes of watching eggs tumbling out we realize we are not alone. Martin has spotted two lights in the distance and has started collecting eggs from beneath the turtle.

The speed at which he is plunging his hand into the hole convinces me that if the lights are of poachers, we will be in danger. I snatch the bag from Martin so he can use both hands.

As he fills the bag, the lights grow brighter. The eggs continue to drop from the turtle. Martin gathers them as quickly as he can, delving deeper into the hole. My heart rate intensifies with each egg. Christ, how many are there?

The bag becomes heavier and the lights shine brighter, scanning left to right, until they’re almost upon us.

Then they stop. Ten yards away. Between us and the ocean. Martin stops collecting eggs and waits. I scrunch the plastic bag and hold my breath.

The lights remain motionless for a moment and then slowly, very slowly, scan the beach, like lighthouse beacons. I close my eyes as they sweep over us. They scan 360 degrees and land pointing in the other direction. Thank god for that. They’ve missed us.

Both lights suddenly swivel and zone in on our position. They shine brighter and brighter as they approach quickly. I look at Martin. “What do we do,” I whisper. “I don’t know,” he says, adjusting his glasses. Blinding light fills the air above.

We stand up and squint into the interrogation glare. A man’s voice from behind the flashlight says something in Spanish that I don’t understand. Martin, who has his hand up protecting his eyes, responds and tells me to give them the bag. A few more muffled exchanges follow before I notice a clipboard in the man’s hand. The other woman has a book and a tape measure. They lower their torchers.

Martin turns to me and puts his hand on my shoulder. “It’s okay, they’re conservationists,” he says. “They can guard the eggs now.”

I breathe again and examine my undies.

They record the size of the turtle, staple a metal bracket to its flipper and gather the rest of the eggs (75 in total). We say adios and hop back onto the motorcycle.

Martin turns around. “What do you want to do now Simon,” he says. “Go back to the lodge, or carry on?”

I look along the deserted beach and wonder how long it will be until it’s invaded by tourists. With the upcoming airport extension, not long I suspect. No doubt with it will come bright luxurious hotels, ocean-view restaurants and night tours led by men in green turtle t-shirts, maybe signs forbidding motorbikes on the beach too.

For now though there are no warnings, no tourists and no need to return home. I grab onto the back of the motorbike, “let’s find some more turtles.”

Are you a solo traveller keen to visit Colombia? Check out Kagumu’s array of solo adventures by clicking here.