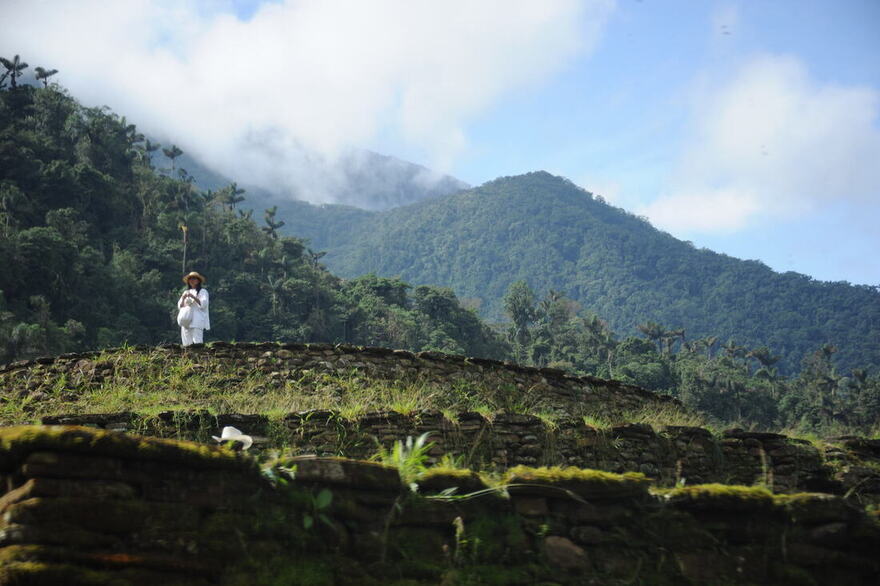 From the Spanish conquest to grave-robbers and looters, and from kidnappings to the emergence of Colombia’s most famous archaeological site; here’s what to know about the Lost City.

Hidden behind the gnarled trees and low-hanging vines lies a trail to the country’s most famous archeological site: The Lost City. There are still many secrets and unknowns about this spellbinding ancient city, that was hidden from the world for centuries. What we do know however, makes a journey to Colombia’s fast-growing adventure destination even more intriguing.

Derived from the spiritual and political capital city of the disappeared Tayrona culture, the site is actually called: Teyuna. The Tayrona people inhabited Colombia’s Caribbean coast around 200 A.C, colonizing the fertile cliffs of La Sierra Nevada de Santa Marta. They connected their settlements with miles of stone trails and created commercial networks in order to exchange products coming from the mountains and from the sea.

Deep within the dense vegetation, you can spot the remains left by these innovative engineers: stone paths, winding stairs, moss-covered walls and rounded terraces which used to form bases for their buildings and graves for their ancestors.

Over time, Teyuna became known as the Green Hell, then Buritaca 200, and later the Lost City or Ciudad Perdida in Spanish.

​La Sierra Nevada had been inhabited for centuries by the Tayrona tribe before the Spanish conquerors arrived in the 16th century. Formerly peaceful communities living by the coast were forced to retreat up the mountains to escape violence and illnesses brought by the European invaders.

Their legacy was not completely lost however. Nowadays their descendants are divided into four ethnic groups – the Kogui, Wiwa, Arhuaco and Kankuamo. The first two communities still inhabit villages along the way to Teyuna with some working in the tourism industry.

Visitors heading to the Lost City learn about the traditions of these communities such as the clothes they wear, the food they eat and the unique tools they hold so dear to their culture.

​In the 1970s, farmers began to inhabit the lower parts of the mountains, escaping other types of violence: Colombia’s civil war and gang conflicts caused by drug trafficking.

At the beginning of the trek you will notice mountains burned grey by chemicals that were used to destroy illegal cultivations. A harsh, lasting memory of the environmental destruction of the drug trafficking industry.

Fortunately, nowadays residents of the region work with tourism – a profitable, safe and legal alternative to marihuana and coca production. Local farmers are heavily involved in the industry, building some of the campsites, leading travelers along the trail and using their mules to carry food for groups visiting the Lost City.

The Lost City – its rediscovery

​The Lost City is an archaeological site, spanning 30 hectares, that was abandoned by the Tayronas due to the spread of illnesses such as tuberculosis. Over the next 300 years tagua palms, roaming vines and bushes engulfed the area, hiding it from the world.  In the 1970s, looters and grave robbers, looking for tombs and refined golden pieces buried within, accidentally rediscovered the Lost City.

They uncovered an intriguing site boasting a complex system of stone trails, rounded terraces and carved walls. All built by great architects and engineers. And all without any sort of machinery!

Unfortunately, this knowledge has been lost over time, mainly due to their lack of writing systems and historical knowledge. Every now and then, you can find petroglyphs, showing figures nobody is able to give an interpretation to.

Thanks to the Colombian government’s restoration work starting in 1976 coupled with the Colombian Institute of Archeology and History’s protection and maintenance, the Lost City has become one of Colombia’s most important attractions. So much so, that the 50.000 Colombian pesos bill has an illustration of the Lost City on it!

Due to its fertility and privileged position in the Caribbean region, the area around the Lost City became the center of a violent conflict for those looking to control drug trafficking routes and cocaine laboratories.

This war between paramilitary and left-wing guerrilla groups led to the ​kidnapping of eight visitors in the archaeological site in September 2003. This incident forced a stronger army presence in the area and in turn encouraged more people to visit. This created a much safer way of earning money for locals, meaning that drug cultivation is no longer desired. From attracting around 1000 tourists annually, the Lost City trek now welcomes approximately 25000 every year.

​Visitors encounter a wild array of astonishing nature along the trail – mist-engulfed forests, enchanting valleys, natural pools and rivers to plunge into.

You will see humming birds in the morning, toucans crossing the sky, and snakes passing by the trails. Look out for blue morphos flying around and cup your ears for howling monkeys. My tip is to keep your eyes out and listen to your guide who should know where wildlife will be lurking.

The wonderful landscapes make it possible to appreciate not just the Lost City, but also the walk itself. A journey that combines native cultures, unbelievable views, hikes and the most important archaeological discovery in Colombia’s history.

You can catch professor Giraldo talking about ancient Colombian sites in National Geographic’s TV series: “Lost Cities with Albert Lin.” In this episode he shows us the process of discovering a new archeological site and a possible route into discovering another world of lost civilizations that can teach us more about our ancestors and maybe our own roots.Fancy exploring the Lost City? Click here to join one of our all-inclusive trips to the Lost City.